Friday Night Organ: NOT TONIGHT! Instead we have an Austrian Pastry

Heinrich Ignaz Franz von Biber (1644 – 1704). WOW that name is a mouthful—just like an Austrian pastry and just as delicious...even if he started out Bohemian.

Biber was born in Wartenberg, Bohemia. Little is known about his early education, other than that he may have studied at a Jesuit Gymnasium at Troppau in Bohemia, and that he may have had musical education by a local organist. Before 1668 Biber worked at the court of Prince Johann Seyfried von Eggenberg in Graz, and then was employed by the Bishop of Olmütz, Karl II von Liechtenstein-Kastelkorn, in Kremsier. Biber's associate from the early 1660s, Pavel Josef Vejvanovský, worked there as director of the Kapelle. Biber apparently enjoyed a good reputation, and his violin playing skills were very highly regarded.

In summer 1670 Karl II sent Biber to Absam, near Innsbruck, to negotiate with the celebrated instrument maker Jacob Stainer for the purchase of new instruments for the Kapelle. Biber never reached Stainer, however, and instead entered the employ of the Archbishop of Salzburg, Maximilian Gandolph von Kuenburg. (what the hey—even back then money$$$ talks BS walks!)  Because Karl and Maximilian were friends, Biber's former employer refrained from taking any action; he was, however, very hurt by the composer's decision, and waited until 1676 to officially issue his release papers. It is not coincidental that most of the autograph compositions Biber sent to Kremsier date from the early 1670s. Biber remained in Salzburg for the rest of his life.

His musical and social careers flourished: he started publishing his music in 1676, performed before the Emperor Leopold I (and was rewarded by him) in 1677, became deputy Kapellmeister at Salzburg in 1679 and Kapellmeister in 1684. In 1690 Biber was raised to nobility by the Emperor, with the title of Biber von Bibern. Finally, the new Archbishop of Salzburg, Johann Ernst, Count Thun, appointed Biber lord high steward, the highest social rank Biber would attain.

The composer was married on 30 May 1672 at the Bishop's summer residence, Hellbrunn Palace, just outside Salzburg. His wife Maria Weiss was a daughter of a Salzburg merchant, citizen and tradesman, Peter Weiss. Together they had 11 children, four of whom survived to adulthood. All were musically gifted. Anton Heinrich (1679–1742) and Karl Heinrich (1681–1749) both served as violinists at the Salzburg court, and the latter was promoted to Kapellmeister in 1743. Daughters Maria Cäcilia (born 1674) and Anna Magdalena (1677–1742) became nuns at Santa Clara, Merano, and the Nonnberg Abbey, respectively. Anna Magdalena was an alto singer and a violinist, and in 1727 became director of the choir and the Kapelle of the Abbey.

November 3, 1692, Biber was appointed Steward by his Archbishop Johann Ernst. He then received his Coat of arms. Biber died in Salzburg in 1704, and his grave is located in Petersfriedhof.

Biber's violin music was influenced by the then-nascent German polyphonic tradition as exemplified by Johann Heinrich Schmelzer, who may have been Biber's teacher. Biber's achievements included further development of violin technique – he was able to reach the 6th and 7th positions, and his left-hand and bowing techniques were far more advanced than those of contemporary Italian composers. He also excelled at counterpoint, frequently writing fully polyphonic textures, with much use of multiple stops. Yet another area in which Biber made a substantial contribution was the art of scordatura, i.e. music for alternative tunings of the instrument. (He would often cross strings) Finally, much of Biber's music employs various forms of number symbolism, affekten, programmatic devices, etc., as seen in the symbolic retuning of the violin for the Resurrection sonata of the Mystery Sonatas.

During the latter half of the 17th century Biber was, together with the composers of the Dresden school (Johann Jakob Walther and Johann Paul von Westhoff), regarded as one of the best and most influential violinists in Europe. However, soon after his death, German violinists started following the style of Arcangelo Corelli and his imitators.

Mentioned above are the “Mystery Sonatas”. Also know as the Rosary Sonatas it is a collection of short sonatas for violin and continuo, with a final passacaglia for solo violin. Each has a title related to the Christian Rosary devotion practice and possibly to the Feast of the Guardian Angels. It is presumed that the Mystery Sonatas were completed around 1676, but they were unknown until their publication in 1905. The music of Biber was never entirely forgotten due to the high technical skill required to play many of his works; this is especially true of his works for violin. Once rediscovered, the Mystery Sonatas became Biber's most widely known composition.

Here is the Passacaglia—often referred to as The Sonata of the Guardian Angel. In my personal view this is the most beautiful work for violin ever written. (Sorry J.S.) And the babe playing it is super hot, 9-10. This will be 10 minutes of your life you will never regret.

In keeping with my tradition of refraining from cherry picking works and instead providing COMPLETE collections here is the complete Rosary Sonatas:

(48:03) The Scourging at the Pillar III: Sarabanda

(109) The Carrying of the Cross II: Courente

(101) The Crucifixion I: Praeludium

(128) The Descent of the Holy Ghost II: Gavotte

(101) The Descent of the Holy Ghost IV: Sarabanda

(138) The Assumption of the Virgin I: Praeludium

(127) The Assumption of the Virgin III: Gigue

(130) The Coronation of the Virgin I: Sonata

(110) The Coronation of the Virgin III: Canzona

(106) The Coronation of the Virgin IV: Sarabanda & Double

I was going to feature some works by Schmelzer, Vejvanovský, Corelli and Locatelli but the plate is pretty full and you may need time to recover your senses after listening to the Passacaglia...maybe even pour a drink or two.

So I’ll leave you with some really upbeat must from Biber, here is his sonata #7 for half a dozen trumpets and continuo:

AND his Sonata IV in C Major for Trumpet and Strings. (Yes I know the trumpet doesn’t look like a trumpet—the players are using instruments of the period). 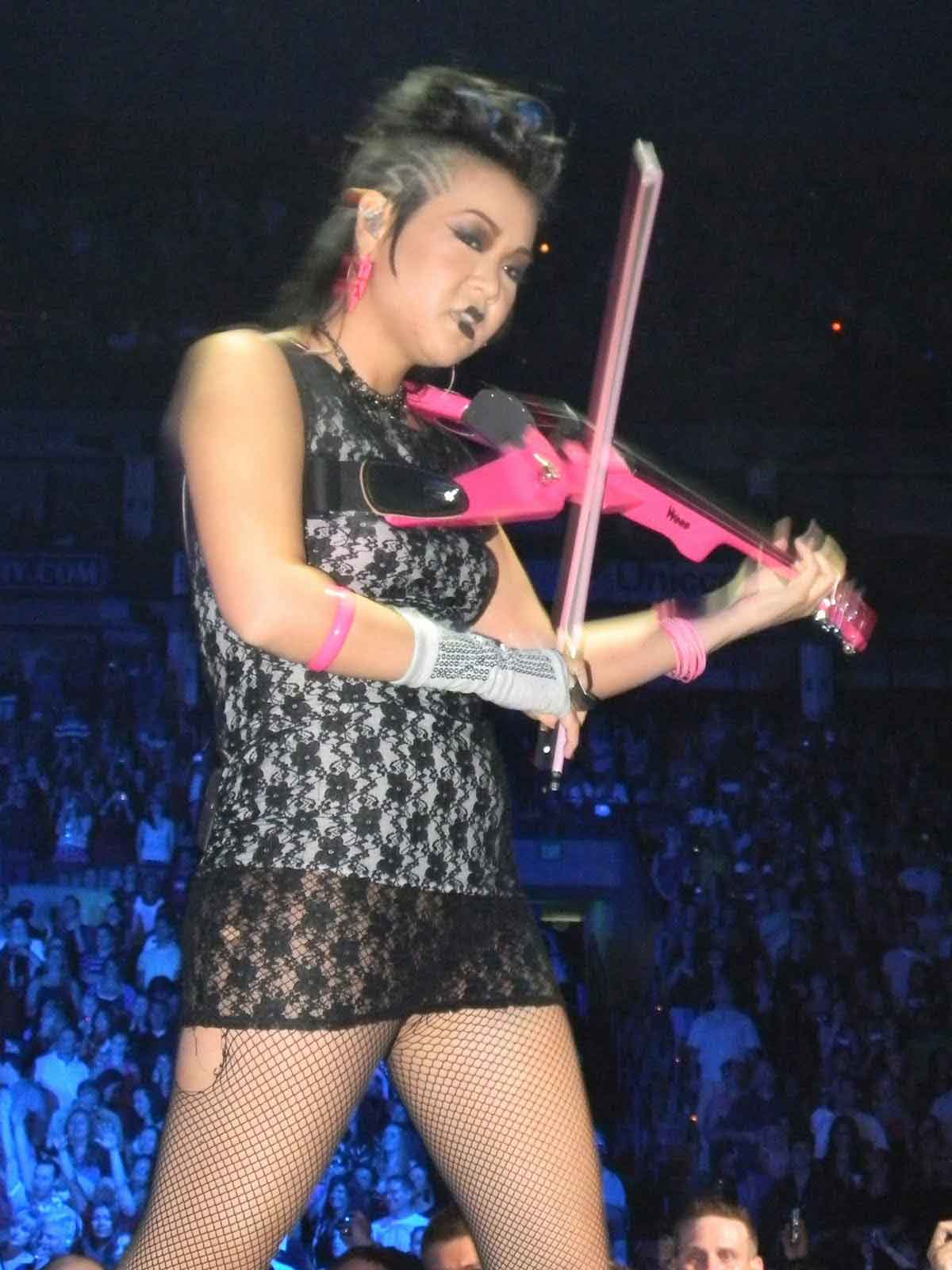 Thanks Pete. Something to look forward to for the commute home from work.

That looks like the yellow version of Cindy Lauper.

You know von Biber's Rosenkranz went undiscovered and unheard for 229 years--it would be nice if whatever that is in the picture also disappeared for a similar period.

Oh god Tower, I just threw up pickles and bloody mary mix everywhere.  It now looks like I skinned a cat in my living room...

I want to use eye bleach, but I have to save it for the carpet cleaner.

Thanks Evil Genius, I will share this music with the guys on the "fight club room that shall not be named".

Oh god Tower, I just threw up pickles and bloody mary mix everywhere.  It now looks like I skinned a cat in my living room...

I want to use eye bleach, but I have to save it for the carpet cleaner.

Thanks Evil Genius, I will share this music with the guys on the "fight club room that shall not be named".

Carpet? I stopped using carpet as a home puke/catch-all late last century when I moved out of my apartment!

Tile and hard wood floors with dust pan for sweeping up puke, then wipe quickly and you're golden!

Thanks for posting the Sonata of the Guardian Angel. The combination of technical skill and musicianship of the violinist is impressive. The warm resonant acoustics of the church really add to the music and bring out the subtle nuances of her performance. Yes, the violinist is beautiful, I think much of it is that she is not an empty shell like we see portrayed every day in the media. Acquiring that level of skill with a violin takes many years so she started as child, the diligence required, the needed self discipline (because without at least 10 hours of practice a week, you aren't making any progress) completely changes how a woman views herself. This is a prime example of someone who is internally validated, not externally validated. Notice zero effort to exploit SMV by the violinist. She doesn't need to.