Goya foods - standing up to the idiotic woke mob!

The woke mob are idiots.  They do not understand what free speech means.  They refuse to learn actual definitions of the words they use out of context.  Every day their mouths prove how uneducated they are.

The CEO of Goya foods thanked President Trump for on Thursday as he visited the White House.  Bob Unanue commented “we’re all truly blessed at the same time to have a leader like President Trump, who is a builder” and the collective head of the Marxist Party exploded.

The champions of free speech immediately condemned the hate speech and are demanding a boycott of the Goya brand.

Dumb cunt AOC tweeted “Oh look, it’s the sound of me Googling ‘how to make your own Adobo'”, but really?  How can a stupid bartender figure out to mix salt, pepper, garlic powder, onion powder, turmeric, and oregano together?  After all, she probably has to Google "how to use a band-aid" when trying to figure out how to slice the salt...

Goya foods has donated over a million pounds of food to the poor and impoverished communities.  They have done more than the Marxist proclaim to do.  Goya's actions are volumes louder than words.

We need to support this company, and others who stand up to the idiocy mob.  If you do not like ethnic food or flavors, spend $20 on their products and donate to a local food pantry.  Their canned beans work great in chili.  Their Adobo seasoning is exactly the mix I use on poultry and pork.  Their cookies are pretty good, too. 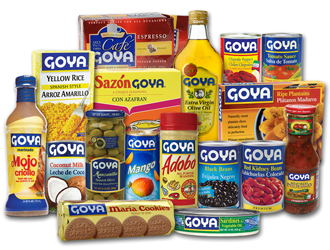 The idiocy mob needs to be shamed until they crawl back into the echo chambers from where they emerged.  They are very emotional beings and cannot tolerate rejection.  If the general public stops giving them attention, and starts a public common sense "echo chamber", the idiocy mob will quietly recede back into the internet.

Maybe we need to build a matrix, where snowflakes and the intolerant can have their own society, so they can work out the intricacies of the social experiment they crave!  Then we can harness the power generated and save the planet!  Soylent Green - it's powered by people!

Beered by The Evil Genius, Uly The Cunning, Frank V. and 1 people
Quote

I hear you. Last round of groceries I ordered included a big bag of their long grain rice and a number of other items to experiment with.

Some pretty good products. Another plus is that they where on sale because of the boycott.

Beered by The Evil Genius, Uly The Cunning and Old Buck
ReplyQuote

I added some of their bags of dried beans to my pantry.  The cookies taste just like the windmill cookies I used to eat at Grandma's house as a child.  The Adobo seasoning is used on eggs, chicken, hell almost everything I use salt on!

Beered by The Evil Genius, Uly The Cunning and Frank V.
ReplyQuote

I will be sure to alter my shopping accordingly, when I get groceries next. This company has my support.

Here are some places to buy their products.

Living in Texas where there is a large Hispanic population has meant that Goya products are easy to come by for me.  I may just look into purchasing some of their stuff, it wouldn't hurt.