9 years ago on June 26-27, 2010 the G20 Summit was held in downtown Toronto rather than the originally proposed Huntsville, Ontario due to lack of accommodations for all of the delegates & media. What followed was bedlam.

Protests took place & hundreds of law enforcement officers were brought in from around the country in order to provide security.

Not all of the protests were peaceful, some used black bloq tactics, donning masks & all black clothing, smashing windows of dozens of businesses & in the confusion some police cars were "abandoned" (note the weapons were removed) & set on fire. Afterwards they shed the black clothing & masks in order to blend in with the rest of the peaceful protesters. 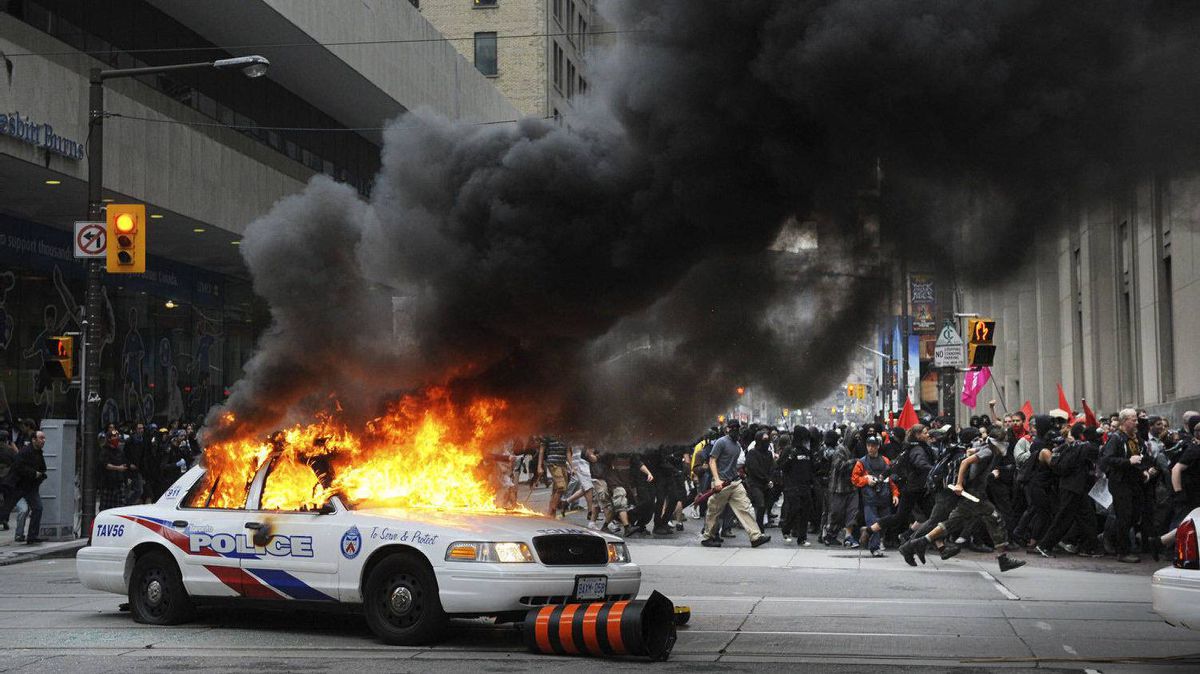 I have heard rumors that agent provocateurs were employed by the police in order to have an excuse to crackdown on the protesters, although that seems unlikely to me given that these "protests" take place at all of the similar summits around the globe.

An agent provocateur (French for "inciting agent") is a person who commits or who acts to entice another person to commit an illegal or rash act or falsely implicate them in partaking in an illegal act, so as to ruin the reputation or entice legal action against the target or a group they belong to. An agent provocateur may be a member of a law enforcement agency acting out of their own sense of duty or under orders, or other entity. They may target any group, such as a peaceful protest or demonstration, a union, a political party or a company.

The riot squads used a tactic known as kettling in order to subdue the protesters.

Kettling (also known as containment or corralling)[1] is a police tactic for controlling large crowds during demonstrations or protests. It involves the formation of large cordons of police officers who then move to contain a crowd within a limited area. Protesters are left only one choice of exit controlled by the police – or are completely prevented from leaving, with the effect of denying the protesters access to food, water and toilet facilities for a time period determined by the police forces.

On June 27, 2010, 200 persons, including protesters, bystanders and news reporters, were kettled in Toronto at the intersection of Queen St. and Spadina Ave. during the G20 summit protests. Several hundred people were also kettled outside of the Novotel Hotel on the Esplanade and arrested.[12] The following year the Toronto Police Department swore to never use kettling again.[13] In August 2015, police superintendent David 'Mark' Fenton was convicted of two charges of unlawful arrest and one charge of discreditable conduct, disciplinary offences under the Police Act, for ordering the kettling in 2010.[14] However, the judge convicting Fenton also made it clear that "That said, containing or kettling is not illegal".[15]

On March 15, 2011, 250–300 protesters in Montréal were kettled on St-Denis just north of Mont Royal during the Annual March Against Police Brutality. Police used stun grenades, riot gear, and horses to kettle the crowd.[16]

On May 23, 2012, police in Montréal moved in on student protesters, kettling them and making 518 arrests—the largest number in one night since the student protests began weeks earlier.[17]

On March 15, 2013, at the annual police brutality march, the police kettled a group of protesters on Ste-Catherine street in Montréal after the march was declared illegal for not presenting an itinerary before the protest. After almost two hours of attempting to break up the groups protesting, the police closed in and arrested anyone caught in the kettle. At the end of the evening police stated that there were around 250 arrests, 2 injured police officers and one protester who was unwell.[18]

In the end more than $800 million dollars were spent, over 1100 people were arrested & parts of the downtown core were effectively under siege due to some of the protesters destructive behavior & the consequent dispatching of riot squads.

That was the most overt display of power I have ever personally witnessed & it was not pretty. The abuse of power & the corruption exposed me to the thin veneer of civilization which we call society. It clearly demonstrated that the people are not in charge & if they object they will be met with jackboots, riot shields & truncheons.

Below are 2 documentaries which chronicle the protests, the incarcerations & the ensuing legal battles. Very few convictions were made in the end as far as I know. One protester won a settlement against the police for brutality. Overall it was a net loss of freedom in my estimation.

The sign says it all and it's worth a thousand words, only the words industry and democracy are out of substitutes.

This is the end goal for Google.  When their computers become self aware, humanity will be destroyed.

This is the end goal for Google.  When their computers become self aware, humanity will be destroyed.