"That Others May Live", this is the moto of the United States Air Force Special Operations Command Pararescuemen (PJ's).

These soldiers have the unique mission of conducting rescue operations, personnel recovery and combat search and rescue.  Highly trained in medical skills, tactical proficiencies, physical fitness and air-land-sea operations, these professionals are fully capable of performing with any other Spec Ops community members as appropriate. 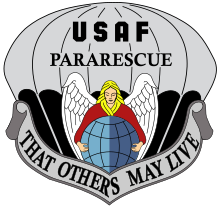 Related training programs ("Superman School") require a minimum of 93 weeks (~2 years) to complete and is the longest special operations training program in the world. The attrition rate is around 80%.

From Wiki - "Capt. John L. "Blackie" Porter—a former stunt pilot—is credited with commanding the first organized air rescue unit in the theater. Known as "Blackie's Gang" and flying out of Chabua, India, they were equipped with two C-47 aircraft. One of their first rescue missions was the recovery of twenty people who had bailed out of a stricken C-46 in August 1943 in the Naga area of Burma; an area that contained not just Japanese troops, but tribes of head hunters as well. Among the twenty was CBS reporter Eric Sevareid. The men were located and supplies were dropped to them. The wing flight surgeon, Lt. Col. Don Flickinger, and two combat surgical technicians, Sgt. Richard S. Passey and Cpl. William MacKenzie, parachuted from the search planes to assist and care for the injured. At the same time, a ground team was sent to their location and all twenty walked to safety."

Information regarding one PJ - Duane D. Hackney (June 5, 1947 – September 3, 1993), of Flint, Michigan, a United States Air Force Pararescueman, was the most decorated enlisted man in USAF history and the recipient of 28 decorations for valor in combat and more than 70 awards and decorations in all. He served in the Air Force from 1965 to 1991, retiring as a Chief Master Sergeant. A recipient of the Air Force Cross, he was the first living enlisted man to receive the medal, and at the time of its award he was its youngest recipient. 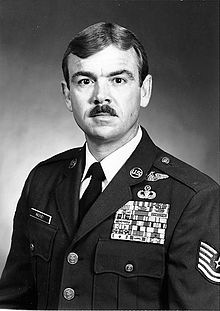 What we can do when in the right place and with the right motivation is remarkable. It takes that extra push from being the right person to do be beyond remarkable. This man did what people will only barely understand through movies and television, and showed how valuable the actions of a man can be.

Selfless service towards someone they don't know personally, only that they need help.  Military or civilian, PJ's are there to recue the living, or return the deceased.

Latest Post: Joller is here. How are you all? Our newest member: Amerzone Recent Posts Unread Posts Tags