5 Vegetables, a Pastor and a Transgender.

This popped up on my You Tube suggestions. It's part 2 of a Ugandan interview. I don't know why it popped up....I hadn't even seen part 1.

Anyway....I had to show you. I just had to. It's one of the weirdest interviews I've ever seen. A transgender woman is being interviewed and then a Pastor suddenly turns up with a shopping bag full of dick shaped vegetables.

My personal favourite part is around 12 minutes and 30 seconds in, where the incensed Pastor asks the transgender which vegetable they prefer during sodomy...and the transgender replies "stop insulting my food".

I started wearing a miscle shirt and a speedo to the mall food court.  A guy try to fight me last week but then I showed him my dick and he was all about doing gay stuff after that.  I savagely wrecked his mouth and stole his wallet.  Apparently he's a member of the Teamsters union and had three dollars in his wallet.

Stop insulting my food, said with such a low tone, lol.

Some of the most aggressive eating of vegetables I have witnessed in a long time.

Very funny video, I enjoyed listening to these three people conversing - like a lot. Unfortunately, there are some parts in which especially the pastor Senpa speaks in (what to my untrained ears appears to be) tongues. This pastor (who eats some of the vegetables he brought loudly and in a flat out offensive way, almost every time his opponent, a woman dressed as a man, tries to make her points) is quite a vivid and passionate guy, who has a lot to say - and does so rather quickly - and likes to wave with his arms, while holding vegetables, simultaneously, or in other ways to underline his words with lots of grand gestures, mimic and movements.

Hence, the entanglement of these three is very entertaining to watch and listen to. While being called a sodomite, a confused, sick and twisted person by the pastor, the transgender woman talks about herself being a human rights activist (of the LGBTQI+ special forces division, as it turns out), who does not even receive as much as 100 US$/year for her advocating work, which she loves (the work, not the amount of payment).

The moderator or show host with little success and for half an hour tries to calm down the pastor, so that we can actually hear some of the activists´ claims.

Which are... lame, to be honest. She for instance cannot really answer the question as to why she would only advocate human rights for LGBTQI+ and not for "H people" (heterosexuals) as well. She has no real answer to this or I didn´t catch it, because the pastor caught my attention waving around the phallus-shaped vegetables he brought and talking over her quickly in err Afrikaans?

This pastor Senpa said something that especially got me thinking.

(He explains as well, that public tolerance of homosexuality is forced upon African nations by the West, which would "pressurize individuals" (politicians) in positions of power to initiate corresponding homo-friendly legislation in African nations)

I can somewhat relate to his assessment. And like the human rights activist stated, herself: what two adults do behind closed doors is their own business.

I do not want to be dragged into (publicly discussing) the legitimacy or illegitimacy of their vices/sodomy/intimacy. I´d rather they stay behind closed doors and do whatever - as long as they commit no crimes in the process and "do not bother" me or others with their dirty practices, that would be somewhat fine with me.

Here in the West I have zero interest to listen to them complain that they would not be "represented enough" or treated "unfairly", because of them indulging in homosexuality - or alphabet craze. In my eyes trans-, poly- and homosexuals are being pandered to by "woke western society" in an unhealthy and perverted manner, anyhow.

They have all their flags and marches and TV shows and popsingers and - where I live - they even have their own districts, clubs and bars and streetlights:

They can gay-marry, become CEO, chancellor or mayor or head of a populist political party - they can do whatever they want and get sugar blown up their asses, additionally, for being so gay at it.

Regarding this whole homo/alphabet-people promo campaign, that is touring through the Western World like a circus/freak show, I am a lot like the youth in my country: I cannot hear it, anymore. FFS. It has been overdone to death, the supposedly oppressed - again - have long become one of the oppressing classes, themselves. It´s like the oh-so oppressed wamens of the past: they themselves have long become the figureheads of the establishment, which is sucking dry the rest. They - for a short period - have become the hammer to smash all and everyone who sticks out of the "officially approved consumerist cunt philosophy" of the current hour in time.

And they - being high end consumers, fortuitously - cannot seem to get enough of it and do carry on decrying ever more "injustice", "inequality", "oppression" and such - where there really is none left to speak of. And where there is none left to speak of, they invent them to stay on top of their stroke of luck: micro-aggressions, thoughtcrimes, illegalization of catcalling - what have you?

I have had enough of it. These so called fringe-groups of society claiming that they would need extra special treatment to become equal to the rest can kiss my ass. There are people who actually have it bad, who actually suffer, but no one cares for and no one hears about over all this alphabet noise.

I'm sending one of our resident masseuse 'specialists' around to err...make you feel a bit better. There's 3 of them working today so it's pot luck who'll turn up - it's busy - so keep your fingers crossed -

But you are right - whatever someone does with a carrot is nothing to do with anyone else - but it also shouldn't be rewarded by the rest of us with special treatment.

Errr...just on a side note - I'd like to ashamedly announce that I DO have a great deal of experience with carrots!! I admit it. 😳

Which of the 3 does atm identify as "Barry", again? You know what, never mind: look! 😀 I am good, again!

Don, I do not want to know anything about Barry at all, because of my general dislike of people - you know, I gotta see for it to not become too specific, too fast or I get triggered hard and immediately go on another rant! This can be a devil´s cycle and theoretically go on forever, if it wasn´t for me from time to time falling asleep.

Thank you, my vegetable-experienced friend! Carrots are of the best, I agree, no shame in using them the right way as shown in your picture.

The mouth is created as a natural entrance for carrots, no doubt and no worries!

On another side note: Always remember to bring your crocs when visiting the Grand Canyon!

After a while you may want to have a towel, too.

A search of "carrot fail gif" brought some interesting results...

A clip from the movie "Time Bandits"...

I do believe this is the results of me screwing with Googles algorithm...

I do believe this is the results of me screwing with Googles algorithm...

Oh, this is so good.

Gotta try this, myself.

Grab a snack! It gets even better! 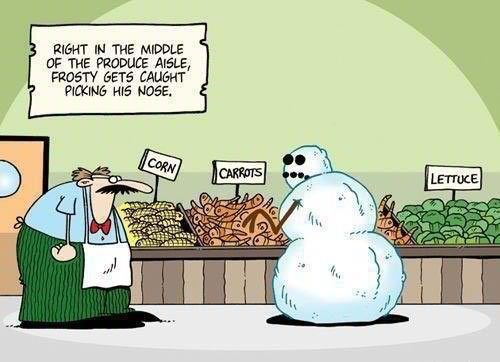