On February 7,  1812 Charles John Huffam Dickens, English journalist, social critic and novelist was born.  He is considered the greatest novelist of the Victorian period and created some of the world's best-known fictional characters.  He created characters such as Oliver Twist, Nicholas Nickleby and David Copperfield and among his other works were The Old Curiosity Shop, A Christmas Carol, Great Expectations, Bleak House and many, many more.

His works enjoyed unprecedented popularity during his lifetime, and by the 20th century, critics and scholars had recognised him as a literary genius. His novels and short stories are still widely read today.

Born in Portsmouth, Dickens left school to work in a factory when his father was incarcerated in a debtors' prison. Despite his lack of formal education, he edited a weekly journal for 20 years, wrote 15 novels, five novellas, hundreds of short stories and non-fiction articles, lectured and performed readings extensively, was an indefatigable letter writer, and campaigned vigorously for children's rights, education, and other social reforms.

Dickens's literary success began with the 1836 serial publication of The Pickwick Papers. 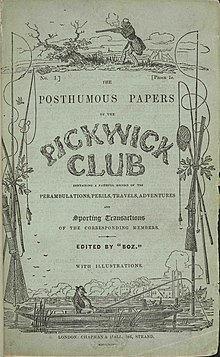 Dickens increasingly took over the unsuccessful monthly publication of the Pickwick Papers after the original illustrator Robert Seymour had committed suicide.

fter the publication, the widow of Robert Seymour claimed that the idea for the novel was originally her husband's; however, in his preface to the 1867 edition, Dickens strenuously denied any specific input, writing that "Mr Seymour never originated or suggested an incident, a phrase, or a word, to be found in the book."

Beered by The Evil Genius and Uly The Cunning
Quote

Dickens is one of my favorite authors. This man had an incredible mind. Always a widow or some female to try to steal credit and earnings from a man, and it is good that Dickens held his ground, lest he be buried by the outrageous claims that would follow any caving in.

Beered by GregBO and The Evil Genius
ReplyQuote

Bleak House is my personal favorite due to its legal background.

Beered by Uly The Cunning
ReplyQuote

I became hooked after reading The Pickwick Papers as a H.S. freshman.

Beered by Uly The Cunning and The Evil Genius
ReplyQuote

I never learned enough about the British Legal system to make any sense of the novel. Given that the entirety of the book is a single legal case, Dickens personal knowledge as a lawyer only makes this book very details and complex.  Not for those who do not have a legal background, expertise, or interest.

Give me the Adventures of Oliver Twist instead, pickpockets, gangs and an escape from the mundane. 😎

Beered by Uly The Cunning and The Evil Genius
ReplyQuote

It was the best of times, it was the worst of time. Why does that feel like it fits today as much as it did then? I had to read C Dickens in school but was probably my favorite forced to read assignment. Didn't C Dickens have marriage trouble too?

Beered by Uly The Cunning and GregBO
ReplyQuote

On 2 April 1836, after a one-year engagement, and between episodes two and three of The Pickwick Papers, Dickens married Catherine Thomson Hogarth (1816–1879), the daughter of George Hogarth, editor of the Evening Chronicle.  They were married in St. Luke's Church,[49] Chelsea, London. After a brief honeymoon in Chalk in Kent, the couple returned to lodgings at Furnival's Inn.  The first of their ten children, Charley, was born in January 1837, and a few months later the family set up home in Bloomsbury at 48 Doughty Street, London, (on which Charles had a three-year lease at £80 a year) from 25 March 1837 until December 1839.  Dickens's younger brother Frederick and Catherine's 17-year-old sister Mary Hogarth moved in with them. Dickens became very attached to Mary, and she died in his arms after a brief illness in 1837. Unusually for Dickens, as a consequence of his shock.

In 1857, Dickens hired professional actresses for the play The Frozen Deep, written by him and his protégé, Wilkie Collins. Dickens fell in love with one of the actresses, Ellen Ternan, and this passion was to last the rest of his life.   Dickens was 45 and Ternan 18 when he made the decision, which went strongly against Victorian convention, to separate from his wife, Catherine, in 1858—divorce was still unthinkable for someone as famous as he was. When Catherine left, never to see her husband again, she took with her one child, leaving the other children to be raised by her sister Georgina who chose to stay at Gad's Hill.

Beered by Uly The Cunning
ReplyQuote

Perhaps the creativity and generations of legacy that Dickens would leave, was not good enough to satiate the desires of his wife.

I remember a documentary I was watching on Einstein, about how his eventual ex would 'challenge' him. The relationship became so uncomfortable that Einstein had decided that she was a better colleague than a wife. I am still uncertain to what extent that she was a colleague. I can imagine that Dickens had to deal with a similar situation with his eventual ex as well. Seeing how females often believe they know more than men, despite education, experience and intelligence. Regardless, Dickens' legacy continues and will do so for many generations to come.

I still read his books on occasion. The writing in those times were far better than the writing we see today. The slang and cursing has reduced our language into a drivel that makes it almost unbearable to listen to for long periods of time. Mark Twain is another that came after Charles Dickens that is an intelligent read. I am currently reading his works when I am relaxing.

For God so loved the world that he gave his one and only Son, that whoever believes in him shall not perish but have eternal life.

Beered by Uly The Cunning and GregBO
ReplyQuote

I continue to be appalled whenever I hear someone mixing in emji/text strings into conversation.  LOL is not a work, nor is WTF, etc etc.  Their lack of understanding as regarding the consequences of mixing languages will result in everyone speaking a second tier form of Esperanto.