June 24, 1717: The Premier Grand Lodge of England is founded in London

The basic principles of the Grand Lodge of England were inspired by the ideal of tolerance and universal understanding of the Enlightenment and by the Scientific Revolution of the 17th century. 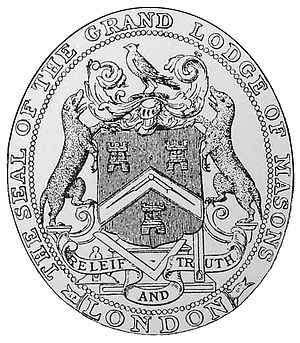 Officially, the Grand Lodge of England was founded in London on St. John the Baptist's day, 24 June 1717, when four existing Lodges gathered at the Goose and Gridiron Ale-house in St. Paul's Church-yard in London and constituted themselves a Grand Lodge. The four lodges had previously met together in 1716 at the Apple-Tree Tavern, "and having put into the Chair the oldest Master Mason (now the Master of a Lodge), they constituted themselves a Grand Lodge pro Tempore in due form."

It was at that meeting in 1716 that they resolved to hold the Annual Assembly and Feast and then choose a Grand Master from among themselves, which they did the following year. All four lodges were simply named after the public houses where they were accustomed to meet, at the Goose and Gridiron Ale-house in St. Paul's Church-yard (Lodge now called Lodge of Antiquity No. 2); the Crown Ale-house in Parker's Lane off Drury Lane; the Apple-Tree Tavern in Charles Street, Covent Garden (Lodge now called Lodge of Fortitude and Old Cumberland No. 12); and the Rummer and Grapes Tavern in Channel Row, Westminster (Lodge now called Royal Somerset House and Inverness Lodge No. IV).

Beered by Happy The Not Very Happy Clown
Quote

Little is known of Anthony Sayer, the first Grand Master, but the next, George Payne, rose to a high position within the Commissioners of Taxes. Payne served as Grand Master twice, in 1718–19, and 1720–21. The year in between was taken by John Theophilus Desaguliers, a scientist, clergyman, and a pupil of Newton.

Thereafter, every Grand Master was a member of the nobility, although in these early years, it is unlikely that they were anything more than figureheads. The intention was to raise the public profile of the society, which evidently succeeded. In 1725, aside from London Lodges, the minutes of Grand Lodge show lodges at Bath, Bristol, Norwich, Chichester, Chester, Reading, Gosport, Carmarthen, Salford, and Warwick, and embryonic Provincial Grand Lodges in Cheshire and South Wales. Grand Lodge was outgrowing London.