Kenneth Arnold makes the first widely reported UFO sighting on June 24, 1947.  He claimed to have seen nine unusual objects flying in tandem near Mount Rainier, Washington.  Arnold was flying in a CallAir A-2 and had made a brief detour in an attempt to discover a crashed U.S. Marine Corps C-46 transport airplane. 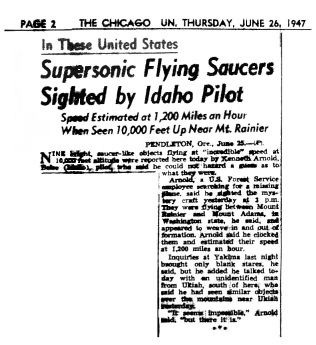 The Chicago Sun coverage of the story may have been the first use ever of the term "flying saucer".

Arnold, a private pilot, claimed that he saw a string of nine, shiny unidentified flying objects flying past Mount Rainier at speeds that Arnold estimated at a minimum of 1,200 miles an hour (1,932 km/hr). This was the first post-War sighting in the United States that garnered nationwide news coverage and is credited with being the first of the modern era of UFO sightings, including numerous reported sightings over the next two to three weeks. Arnold's description of the objects also led to the press quickly coining the terms flying saucer and flying disc as popular descriptive terms for UFOs.

About 30 seconds after seeing the first flash of light, Arnold saw a series of bright flashes in the distance off to his left, or north of Mt. Rainier, which was then from 20 to 25 miles (32 to 40 km) away. He thought they might be reflections on his airplane's windows, but a few quick tests (rocking his airplane from side to side, removing his eyeglasses, later rolling down his side window) ruled this out. The reflections came from flying objects. They flew in a long chain, and Arnold for a moment considered they might be a flock of geese, but quickly ruled this out for a number of reasons, including the altitude, bright glint, and obviously very fast speed. He then thought they might be a new type of jet and started looking intently for a tail and was surprised that he couldn't find any. 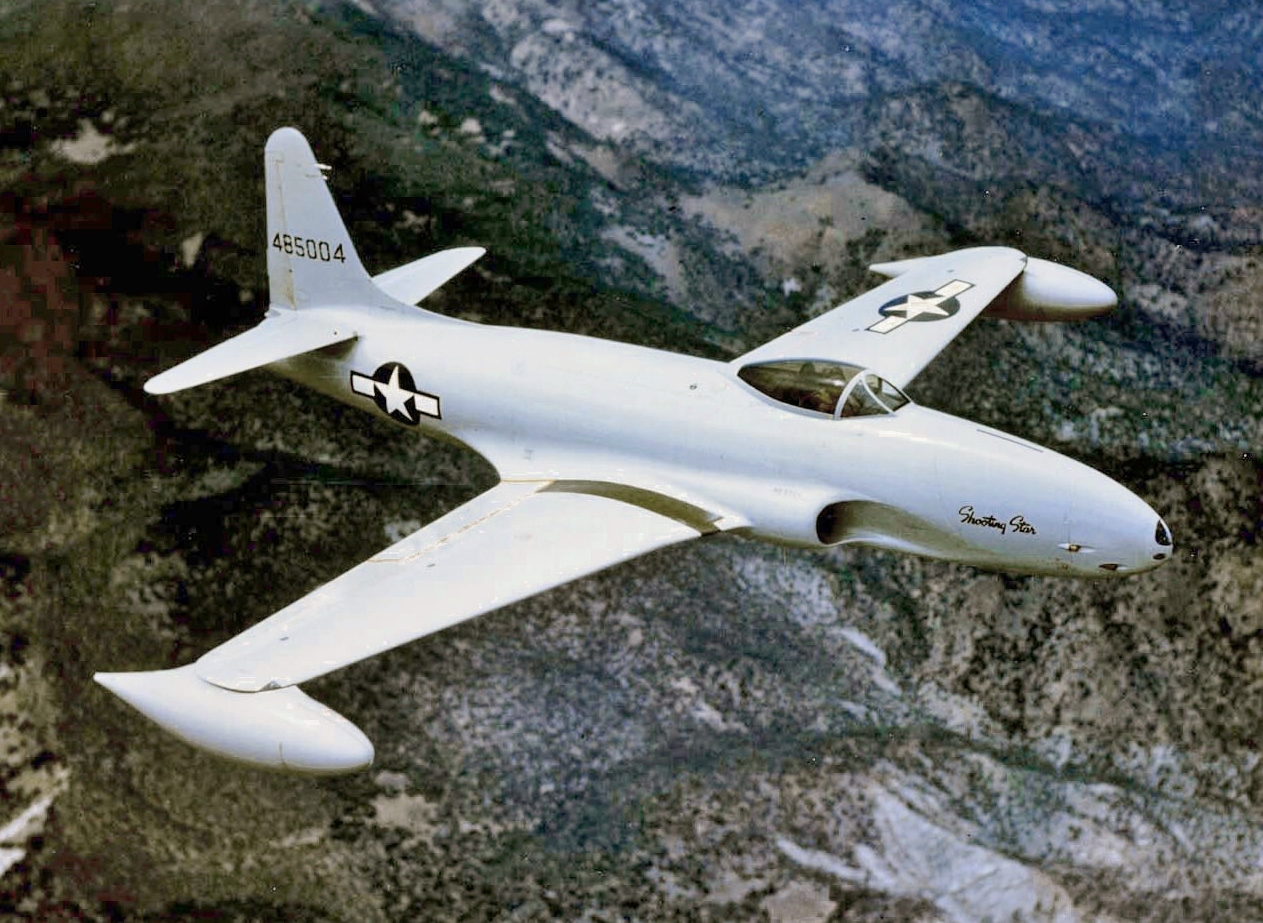 They quickly approached Rainier and then passed in front, usually appearing dark in profile against the bright white snowfield covering Rainier, but occasionally still giving off bright light flashes as they flipped around erratically. Sometimes he said he could see them on edge, when they seemed so thin and flat they were practically invisible. According to Jerome Clark, (American writer, specializing in unidentified flying objects and other paranormal subjects), Arnold described them as a series of objects with convex shapes, though he later revealed that one object differed by being crescent-shaped.

Several years later, Arnold would state he likened their movement to saucers skipping on water, without comparing their actual shapes to saucers, but initial quotes from him do indeed have him comparing the shape to a "saucer", "disc", "pie pan", or "half moon", or generally convex and thin (discussion below). At one point Arnold said they flew behind a subpeak of Rainier and briefly disappeared. Knowing his position and the position of the (unspecified) subpeak, Arnold placed their distance as they flew past Rainier at about 23 miles (37 km).

Arnold's sighting was partly corroborated by a prospector named Fred Johnson on Mt. Adams, who wrote AAF intelligence that he saw six of the objects on June 24 at about the same time as Arnold, which he viewed through a small telescope. He said they were "round" and tapered "sharply to a point in the head and in an oval shape." He also noted that the objects seemed to disturb his compass. An evaluation of the witness by AAF intelligence found him to be credible. Ironically, Johnson's report was listed as the first unexplained UFO report in Air Force files, while Arnold's was dismissed as a mirage, yet Johnson seemed to be describing a continuation of the same event as Arnold.

The Portland Oregon Journal reported on July 4 receiving a letter from an L. G. Bernier of Richland, Washington (about 110 miles (180 km) east of Mt. Adams and 140 miles (230 km) southeast of Mt. Rainier). Bernier wrote that he saw three of the strange objects over Richland flying "almost edgewise" toward Mt. Rainier about one half-hour before Arnold. Bernier thought the three were part of a larger formation. He indicated they were traveling at high speed: "I have seen a P-38 appear seemingly on one horizon and then gone to the opposite horizon in no time at all, but these disks certainly were traveling faster than any P-38. [Maximum speed of a P-38 was about 440 miles an hour.] No doubt Mr. Arnold saw them just a few minutes or seconds later, according to their speed." The previous day, Bernier had also spoken to his local newspaper, the Richland Washington Villager, and was among the first witnesses to suggest extraterrestrial origins: "I believe it may be a visitor from another planet."

When military intelligence began investigating Arnold's sighting in early July (see below), they found yet another witness from the area. A member of the Washington State forest service, who had been on fire watch at a tower in Diamond Gap, about 20 miles (32 km) south of Yakima, reported seeing "flashes" at 3:00 p.m. on the 24th over Mount Rainier (or exactly the same time as Arnold's sighting), that appeared to move in a straight line. Similarly, at 3:00 p.m. Sidney B. Gallagher in Washington state (exact position unspecified) reported seeing nine shiny discs flash by to the north.

A Seattle newspaper also mentioned a woman near Tacoma who said she saw a chain of nine, bright objects flying at high speed near Mt. Rainier. Unfortunately this short news item wasn't precise as to time or date, but indicated it was around the same date as Arnold's sighting.

However, a pilot of a DC-4 some 10 to 15 miles (24 km) north of Arnold en route to Seattle reported seeing nothing unusual. This was the same DC-4 seen by Arnold and which he used for size comparison.

Other Seattle area newspapers also reported other sightings of flashing, rapidly moving unknown objects on the same day, but not the same time, as Arnold's sighting. Most of these sightings were over Seattle or west of Seattle in the town of Bremerton, either that morning or at night. Altogether, there were at least 16 other reported UFO sightings the same day as Arnold's in the Washington state area.

The primary corroborative sighting, however, occurred ten days later (July 4) when a United Airlines crew over Idaho en route to Seattle also spotted five to nine disk-like objects that paced their plane for 10 to 15 minutes before suddenly disappearing.

There are a lot of cases in the late 40s early 50s where the AF sent up interceptors --- P-51s. P-80s, P-84s, and the occasional F-86 and F-94 and they either never came back or they came back in enough pieces to maybe fill a coffee cup. Truly unsung heroes.