The Berlin Blockade (24 June 1948 – 12 May 1949) was one of the first major international crises of the Cold War. During the multinational occupation of post–World War II Germany, the Soviet Union blocked the Western Allies' railway, road, and canal access to the sectors of Berlin under Western control. The Soviets offered to drop the blockade if the Western Allies withdrew the newly introduced Deutsche Mark from West Berlin.

The Western Allies organised the Berlin Airlift (26 June 1948 – 30 September 1949) to carry supplies to the people of West Berlin, a difficult feat given the size of the city's population. 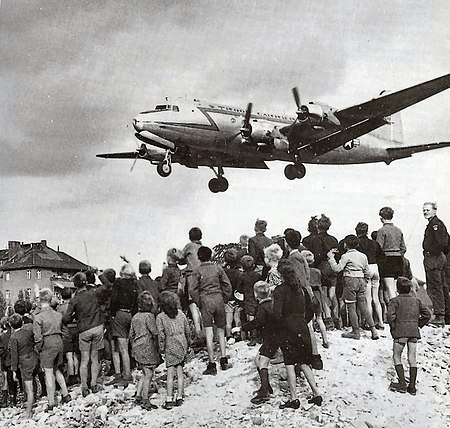 The Americans and British then began a joint operation in support of the entire city. Aircrews from the American, British, French, Canadian, Australian, New Zealand, and South African air forces flew over 200,000 sorties in one year, providing to the West Berliners necessities such as fuel and food, with the original plan being to lift 3,475 tons of supplies daily. By the spring of 1949, that number was often met twofold, with the peak daily delivery totaling 12,941 tons. By this time the airlift was clearly succeeding, delivering more cargo than had previously been transported into the city by rail. The Soviets did not disrupt the airlift for fear this might lead to open conflict, even though they far outnumbered the allies in Germany and especially Berlin.

On 12 May 1949, the USSR lifted the blockade of West Berlin, although for a time the Americans and British continued to supply the city by air anyway because they were worried that the Soviets were simply going to resume the blockade and were only trying to disrupt western supply lines. The Berlin Airlift officially ended on 30 September 1949 after fifteen months. 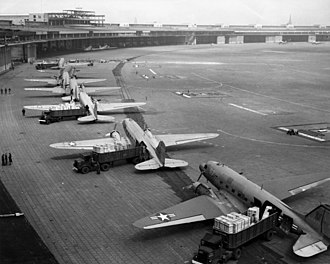 C-47 Skytrains unloading at Tempelhof Airport during the Berlin Airlift

The C-47s and C-54s together flew over 92 million miles in the process, almost the distance from Earth to the Sun. At the height of the Airlift, one plane reached West Berlin every thirty seconds.

Seventeen American and eight British aircraft crashed during the operation.  A total of 101 fatalities were recorded as a result of the operation, including 40 Britons and 31 Americans, mostly due to non-flying accidents. 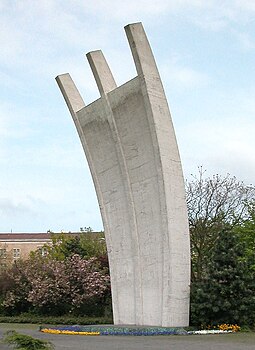 Berlin Airlift Monument in Berlin-Tempelhof, displaying the names of the 39 British and 31 American airmen who lost their lives during the operation. Similar monuments are located at the military airfield of Wietzenbruch near the former RAF Celle and at Rhein-Main Air Base. 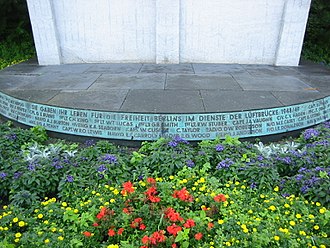 The Berlin Blockade served to highlight the competing ideological and economic visions for postwar Europe and played a major role in drawing West Germany into the NATO orbit several years later in 1955.

Fuck communists and fascists forever. Those dick bags are a plague upon mankind. They think only of plundering food from others.

Our Grandfathers and fathers were undaunted in the face of overwhelming force. They essentially said to the fucking shit licking communists.

You can pretend to own land. But we'll always outmanuever you. You'll always fail. Your internal heart is the failure of envy.

Fuck communists and fascists forever. Those dick bags are a plague upon mankind. They think only of plundering food from others.

Our Grandfathers and fathers were undaunted in the face of overwhelming force. They essentially said to the fucking shit licking communists.

You can pretend to own land. But we'll always outmanuever you. You'll always fail. Your internal heart is the failure of envy.

Communism was only bad when the Soviets practiced it.  Now communism as the Chinese have practiced it has been one the greatest tools of American governmental policy and American economic prosperity since 1979.   For without China and her communism, America as anyone knows it now would not exist.  China makes the world economy work, and China does what Americans don't want to admit that that want, that is slave labor manufacturing dirt cheap goods that Americans are to stingy to pay a little to a lot more for.

So yeah fuck communists, until we all go to the store and buy that cheap shit that we need to make our lives work.  Like the very computer I'm writing this response with.