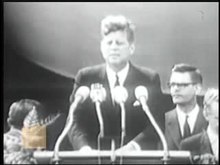 It is widely regarded as the best-known speech of the Cold War and the most famous anti-communist speech. Kennedy aimed to underline the support of the United States for West Germany 22 months after Soviet-occupied East Germany erected the Berlin Wall to prevent mass emigration to the West. The message was aimed as much at the Soviets as it was at Berliners and was a clear statement of U.S. policy in the wake of the construction of the Berlin Wall. Another phrase in the speech was also spoken in German, "Lasst sie nach Berlin kommen" ("Let them come to Berlin"), addressed at those who claimed "we can work with the Communists", a remark at which Nikita Khrushchev scoffed only days later.

The speech is considered one of Kennedy's best, both a notable moment of the Cold War and a high point of the New Frontier. It was a great morale boost for West Berliners, who lived in an enclave deep inside East Germany and feared a possible East German occupation. Speaking from a platform erected on the steps of Rathaus Schöneberg for an audience of 120,000, Kennedy said,

Kennedy used the phrase twice in his speech, including at the end, pronouncing the sentence with his Boston accent and reading from his note "ish bin ein Bearleener", which he had written out using English orthography to approximate the German pronunciation. He also used classical Latin pronunciation of civis romanus sum, with the c pronounced [k] and the v as [w].

There is a widespread misconception (outside German-speaking countries) that the phrase was not used correctly and actually means "I am a doughnut", referring to the Berliner doughnut. It has even been embellished into an urban legend, including equally incorrect claims about the audience laughing at this phrase. 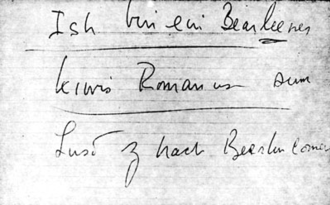 Beered by Happy The Not Very Happy Clown
Quote

GregBO
Admin
Joined: 2 years ago
Posts: 3814
26/06/2020 5:15 pm
There is a widespread belief that Kennedy made an embarrassing mistake by saying Ich bin ein Berliner. By not leaving out the indefinite article "ein," he supposedly changed the meaning of the sentence from the intended "I am a citizen of Berlin" to "I am a Berliner" (a Berliner being a type of German pastry, similar to a jelly doughnut), amusing Germans throughout the city. 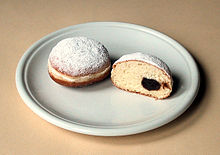 While the phrase "Ich bin ein Berliner" can be understood as having a double meaning, it is neither wrong to use it the way Kennedy did nor was it embarrassing. According to some grammar texts, the indefinite article can be omitted in German when speaking of an individual's profession or origin but is in any case used when speaking in a figurative sense. Furthermore, although the word "Berliner" is used for a jelly doughnut in the north, west and southwest of Germany, it is not used in Berlin itself or the surrounding region, where the usual word is "Pfannkuchen" (literally "pancake").

A further part of the misconception is that the audience to his speech laughed at his supposed error. They actually cheered and applauded both times the phrase was used. They laughed and cheered a few seconds after the first use of the phrase when Kennedy joked with the interpreter: "I appreciate my interpreter translating my German."

The misconception appears to have originated in Len Deighton's spy novel Berlin Game, published in 1983, which contains the following passage, spoken by Bernard Samson:

'Ich bin ein Berliner,' I said. It was a joke. A Berliner is a doughnut. The day after President Kennedy made his famous proclamation, Berlin cartoonists had a field day with talking doughnuts.

In Deighton's novel, Samson is an unreliable narrator, and his words cannot be taken at face value. However, The New York Times' review of Deighton's novel appeared to treat Samson's remark as factual and added the detail that Kennedy's audience found his remark funny:

Here is where President Kennedy announced, Ich bin ein Berliner, and thereby amused the city's populace because in the local parlance a Berliner is a doughnut.[17]

Four years later, it found its way into a New York Times op-ed:

It's worth recalling, again, President John F. Kennedy's use of a German phrase while standing before the Berlin Wall. It would be great, his wordsmiths thought, for him to declare himself a symbolic citizen of Berlin. Hence, Ich bin ein Berliner. What they did not know, but could easily have found out, was that such citizens never refer to themselves as 'Berliners.' They reserve that term for a favorite confection often munched at breakfast. So, while they understood and appreciated the sentiments behind the President's impassioned declaration, the residents tittered among themselves when he exclaimed, literally, "I am a jelly-filled doughnut."[18]

The doughnut misconception has since been repeated by media such as the BBC (by Alistair Cooke in his Letter from America program), The Guardian, MSNBC, CNN,Time magazine, and The New York Times; mentioned in several books about Germany written by English-speaking authors, including Norman Davies and Kenneth C. Davis; and used in the manual for the Speech Synthesis Markup Language. It is also mentioned in Robert Dallek's biography of Kennedy, An Unfinished Life: John F. Kennedy, 1917–1963.

Another reference to this misconception appears in David Foster Wallace's novel Infinite Jest, published in 1996, which contains the following passage:

Few foreigners realize that the German term Berliner is also the vulgate idiom for a common jelly doughnut, and thus that Kennedy's seminal 'Ich bin ein Berliner' was greeted by the Teutonic crowds with a delight only apparently political