The North American X-15 was a hypersonic rocket-powered aircraft operated by the United States Air Force and the National Aeronautics and Space Administration.  The X-plane series of experimental aircraft reached the edge of outer space and returned with valuable data used in aircraft and spacecraft design.

During the X-15 program, 12 pilots flew a combined 199 flights. Of these, 8 pilots flew a combined 13 flights which met the Air Force spaceflight criterion by exceeding the altitude of 50 miles (80 km), thus qualifying these pilots as being astronauts. The Air Force pilots qualified for military astronaut wings immediately, while the civilian pilots were eventually awarded NASA astronaut wings in 2005, 35 years after the last X-15 flight. 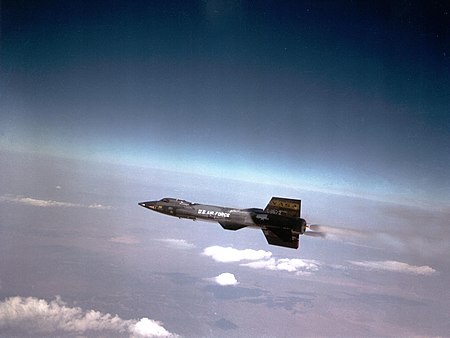 The X-15 pulling away from its drop launch plane

To be stable at these super high velocities, it had to feature a big wedge tail, however, the downside of this was at lower speeds the drag was extremely big from such a tail. Therefore a B-52 Stratofortress had to carry it up to an altitude of about 14,000 meters before dropping it at which it ignited its own engines.

Just imagine sitting in a rocket measuring only 15 m in length and then being dropped, must have been a truly magnificent feeling! The X-15 was used at such extreme speeds so that it did not use traditional ways to steer (using drag over a fin) but instead it used rocket thrusters! This made it possible to reach altitudes higher than 100 kilometres, which was one of its world records. These are the three records that brought the X-15 rocket jet into the history books:

The X-15 was based on a concept study from Walter Dornberger for the National Advisory Committee for Aeronautics (NACA) for a hypersonic research aircraft.

Major-General Dr. Walter Robert Dornberger was a German Army artillery officer whose career spanned World War I and World War II. He was a leader of Nazi Germany's V-2 rocket program and other projects at the Peenemünde Army Research Center. 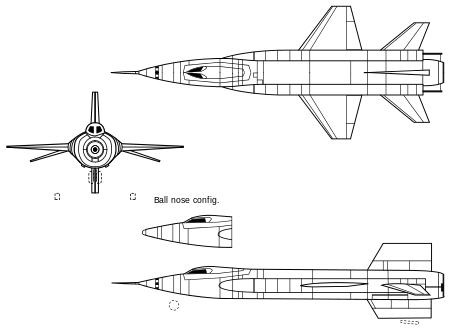 Like many X-series aircraft, the X-15 was designed to be carried aloft and drop launched from under the wing of a B-52 mother ship. Air Force NB-52A, "The High and Mighty One" (serial 52-0003), and NB-52B, "The Challenger" (serial 52-0008, a.k.a. Balls 8) served as carrier planes for all X-15 flights. Release took place at an altitude of about 8.5 miles (13.7 km) and a speed of about 500 miles per hour (805 km/h). The X-15 fuselage was long and cylindrical, with rear fairings that flattened its appearance, and thick, dorsal and ventral wedge-fin stabilizers. Parts of the fuselage were heat-resistant nickel alloy (Inconel-X 750). The retractable landing gear comprised a nose-wheel carriage and two rear skids. The skids did not extend beyond the ventral fin, which required the pilot to jettison the lower fin just before landing. The lower fin was recovered by parachute. 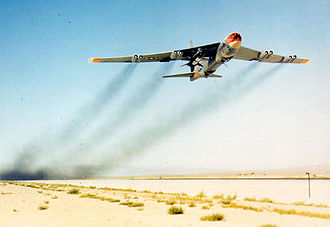 The X-15 "research airplane" was one of over 30 "X-vehicles" produced by US military agencies like the Air Force, the Navy, and NASA between 1946 and 1971. These X-vehicles, mainly airplanes and missiles, were experimental technologies designed in hopes of achieving record altitudes and hypersonic speeds.

These extreme vehicles were tested in the remoteness of the Nevadan desert, with the aim of producing data that could be used to design spacecrafts—specifically, ones that could carry humans. In fact, Neil Armstrong trained for his Apollo 11 mission by flying the X-15. 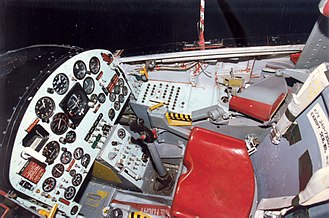 The X-15 was able to climb 50 miles above Earth, into the Thermosphere (53-56 miles above the earths surface) which is high enough for a satellite to enter orbit around the Earth.

† Killed in the crash of X-15-3
** White replaced selected pilot Iven Kincheloe, who died before the first X-15 flight.

The Fédération aéronautique internationale (World Aeronautical Federation), is the world governing body for air sports, and also stewards definitions regarding human spaceflight. It was founded on 14 October 1905, and is headquartered in Lausanne, Switzerland. It maintains world records for aeronautical activities including ballooning, aeromodeling, unmanned aerial vehicles (drones), as well as flights into space.

The U.S. Air Force Astronaut Badge consists of a standard USAF aeronautical badge upon which is centered the Astronaut Device. The Air Force does not consider Astronaut to be a separate rating from its six established rating badges, but as a "qualifier" to them, and may only be awarded by the Air Force Chief of Staff after written application upon completion of an operational space mission. The rating of Observer is used for USAF Mission Specialists who have completed training but not a mission and are not otherwise aeronautically rated as a USAF pilot, RPA (remotely piloted aircraft) pilot, combat systems officer, air battle manager, or flight surgeon.

In 2007, the U.S. Air Force announced the opening of astronaut mission specialists positions to enlisted personnel who met certain eligibility requirements. These requirements include:

No enlisted astronaut badges are yet known to have been issued.

In addition to the astronaut badge, which is worn on a military uniform, an astronaut pin is also issued to all NASA astronauts. It is a lapel pin, worn on civilian clothing. The pin is issued in two grades, silver and gold, with the silver pin awarded to candidates who have successfully completed astronaut training and the gold pin to astronauts who have actually flown in space. Astronaut candidates are given silver pins but are required to purchase the gold pin at a cost of approximately $400.

A unique astronaut pin was made for NASA astronaut Donald 'Deke' Slayton, MAJ (RET), USAAF and USAF in 1967. It was gold in color, like the ones given to astronauts who had flown, and it had a small diamond embedded in the star. It was made at the request of the crew of the first manned mission of the Apollo program as a tribute to Slayton's work at NASA. 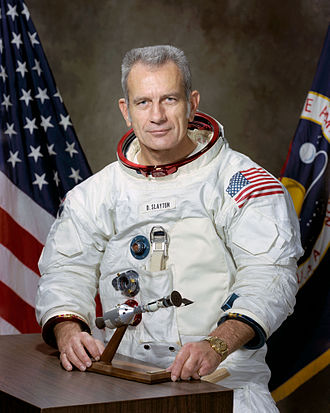 The idea was that everyone in the Astronaut Office had thought Slayton would never get to fly in space (due to his paroxysmal atrial fibrillation; he would later fly on board the Apollo-Soyuz Test Project as docking module pilot), however as they knew it was primarily because of him that they managed to do so, he should wear a gold pin rather than a silver one as a token of appreciation. As they knew Slayton would refuse to wear exactly the same gold pin as veteran astronauts, the diamond was added. The pin was supposed to have been flown on board the Apollo 1 spacecraft, then given to Slayton after the mission was over.

However, the Apollo 1 crew died in a fire during a training exercise on January 27, 1967. 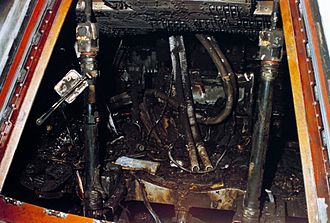 Slayton, who oversaw crew selections at NASA and was present for the test, could see white flames in a closed-circuit television monitor pointing toward the spacecraft. The crew struggled to get out. Technicians raced to the scene, trying to fight the fire with extinguishers amid faulty breathing masks.

The pin was given to Slayton by the three widows of the dead crew as a token of condolence. This diamond-studded gold pin was later flown to the Moon on board Apollo 11 in July 1969.

Clifton Williams, MAJ USMC, was originally scheduled to fly to the Moon as Lunar Module Pilot on Apollo 12 but was killed in a plane crash before he was officially assigned to the flight, Bean was his replacement.

The Apollo 12 mission patch has four stars on it: one each for the three astronauts who flew the mission, and one for Williams (on Alan Bean's suggestion). Also, William's naval aviator wings and silver astronaut pin, along with Deke Slayton's, were placed to rest on the lunar surface in William's honor, left there by Alan Bean during Apollo 12 in 1969.

There you go again memorizing the evil white men and their achievements. Thank God OBLM and ANTIFA are re-writing history. So in the future the X-15 will have been developed by the tonga bonga tribe using bamboo and palm fronds BUT all of the test pilots will be women! See its easy to re-write history. 🙄