Five monks from Canterbury reported to the abbey's chronicler that shortly after sunset on 18 June 1178 they saw "the upper horn [of the moon] split in two". It is believed that the current oscillations of the Moon's distance from the Earth (on the order of meters) are a result of this collision.

From the midpoint of the division a flaming torch sprang up, spewing out, over a considerable distance, fire, hot coals and sparks. Meanwhile the body of the Moon which was below writhed, as it were in anxiety, and to put it in the words of those who reported it to me and saw it with their own eyes, the Moon throbbed like a wounded snake. Afterwards it resumed its proper state. This phenomenon was repeated a dozen times or more, the flame assuming various twisting shapes at random and then returning to normal. Then, after these transformations, the Moon from horn to horn, that is along its whole length, took on a blackish appearance.

Giordano Bruno is a 22-kilometre (14 mi) lunar impact crater on the far side of the Moon, just beyond the northeastern limb. It lies in an area that can be viewed during a favorable libration, although the area is viewed from the side and not much detail can be seen. It lies between the craters Harkhebi to the northwest and Szilard to the southeast.

When viewed from orbit, Giordano Bruno is at the center of a symmetrical ray system of ejecta that has a higher measure of solar radiation reflection than the surrounding surface. The ray material extends for over 150 kilometres (93 mi) and has not been significantly darkened by space erosion. Some of the ejecta appear to extend as far as the crater Boss, over 300 kilometres (190 mi) to the northwest. The outer rim of the crater is especially bright compared to its surroundings. To all appearances, this is a young formation that was created in the relatively recent past, geologically speaking. Based on photos from a lunar orbiter, the crater's age has been estimated at 4 million years.

This feature was named after Italian intellectual Giordano Bruno

Beered by Old Buck and The Evil Genius
Quote

Giordano Bruno was an Italian Dominican friar, philosopher, mathematician, poet, cosmological theorist, and Hermetic occultist. He is known for his cosmological theories, which conceptually extended the then-novel Copernican model. He proposed that the stars were distant suns surrounded by their own planets, and he raised the possibility that these planets might foster life of their own, a philosophical position known as cosmic pluralism. He also insisted that the universe is infinite and could have no "centre".

Modern portrait based on a woodcut from "Livre du recteur", 1578

Starting in 1593, Bruno was tried for heresy by the Roman Inquisition on charges of denial of several core Catholic doctrines, including eternal damnation, the Trinity, the divinity of Christ, the virginity of Mary, and transubstantiation. Bruno's pantheism was not taken lightly by the church, as was his teaching of the transmigration of the soul/reincarnation. The Inquisition found him guilty, and he was burned at the stake in Rome's Campo de' Fiori in 1600. After his death, he gained considerable fame, being particularly celebrated by 19th- and early 20th-century commentators who regarded him as a martyr for science, although historians agree that his heresy trial was not a response to his astronomical views but rather a response to his philosophical and religious views. 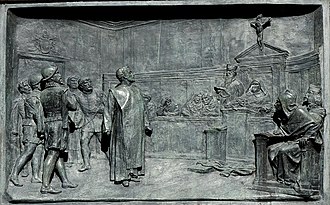 Bruno's case is still considered a landmark in the history of free thought and the emerging sciences.

In addition to cosmology, Bruno also wrote extensively on the art of memory, a loosely organised group of mnemonic techniques and principles. Historian Frances Yates argues that Bruno was deeply influenced by Arab astrology (particularly the philosophy of Averroes), Neoplatonism, Renaissance Hermeticism, and Genesis-like legends surrounding the Egyptian god Thoth. Other studies of Bruno have focused on his qualitative approach to mathematics and his application of the spatial concepts of geometry to language.

While Bruno was distinguished for outstanding ability, his taste for free thinking and forbidden books soon caused him difficulties. Given the controversy he caused in later life it is surprising that he was able to remain within the monastic system for eleven years. In his testimony to Venetian inquisitors during his trial, many years later, he says that proceedings were twice taken against him for having cast away images of the saints, retaining only a crucifix, and for having recommended controversial texts to a novice.