In 1914, at the outbreak of World War I, Ireland was part of the United Kingdom.   But Irish republicans had long been pushing for independence, and tensions ran high in the Emerald Isle.   Thus, when the British introduced conscription in 1916, they exempted the Irish.   Yet many Irishmen still volunteered to serve in the British army. 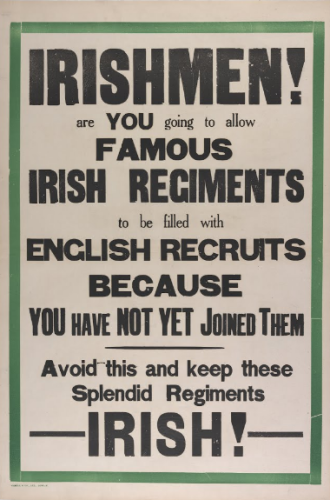 Those from the pro-British north largely enjoyed community support, while those from the republican south faced suspicion and hostility.   Among the latter, Michael John O’Leary earned the Victoria Cross early in the war and to this day ranks among the great heroes of the British army.

Born on Sept 29, 1890, Michael John O’Leary was a fervent Irish nationalist  and keen sportsman who participated in competitive weightlifting and football.  Aged 16 and unwilling to continue to work on his parent’s land, he joined the Royal Navy, serving ashore for several years until medically discharged.   Having little patience for farming, O’Leary managed to enlist in the Irish Guards, in which he served another few years. After his 1913 discharge he immigrated to Canada and joined the Royal North-West Mounted Police, a forerunner of the present-day Royal Canadian Mounted Police.

During World War I O’Leary saw heavy fighting with the Irish Guards and was mentioned in several reports to higher headquarters for his gallant or meritorious service and was promoted to Lance Corporal.    On Jan 30, 1915 O’Leary’s unit came under heavy fire from German barricades and machine gun fire. Regimental Badge of the Irish Guards

When a machine gun in the foremost enemy trench pinned down his unit, O’Leary moved out alone and killed the gun crew with five well-aimed shots.   Advancing 60 yards farther to the second German line, he engaged a second machine gun, also killing its crew.   Though out of ammunition, he then captured two more Germans at bayonet point.

Promoted to sergeant and awarded the Victoria Cross, O’Leary was heralded as one of Britain’s first heroes of the war. King George V himself decorated the Irishman at Buckingham Palace on June 22, and two weeks later thousands of Londoners gathered at Hyde Park to fete O’Leary. Subsequently detached on recruitment duty,  he appeared on one of the best-known British recruiting posters of the war. Initially, his countrymen widely sang O’Leary’s praises. But all that changed, especially after the April 1916 Easter Rising, when many came to regard him as a turncoat for fighting for rather than against the British. Irish playwright George Bernard Shaw even jabbed at O’Leary in a satirical one-act play titled O’Flaherty, V.C.

In 1916 O’Leary redeployed as a lieutenant in the Connaught Rangers—another Irish regiment—serving through war’s end in the Balkans, where he contracted malaria. Discharged in 1921, he returned to Canada for another stint as a policeman.   Personal setbacks prompted his return to Britain, where he found himself in the run-up to World War II.   In 1939 he returned to active duty, as a captain in the Middlesex Regiment, and crossed the channel with the British Expeditionary Force.   But a recurrence of malaria forced his evacuation home before the Battle of France.   He spent much of the war in command of a POW camp in southern England and ultimately retired as a major in 1954.