1962: One Flew Over the Cuckoo’s Nest is published

The motion picture One Flew Over the Cuckoo’s Nest was released on November 19th, 1975,  and was based upon the novel published on February 1st, 1962 and the screenplay by Saul Zaentz and Michael Douglas.  The movie centers around an  anti-authoritarian patient at a mental hospital who becomes an inspiring leader for the other patients. 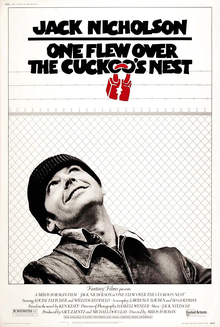 Considered by many to be one of the greatest films ever made, the film was only the second to win all five major Academy Awards (Best Picture, Actor in Lead Role, Actress in Lead Role,Director and Screenplay) after receiving nine nominations.   Silence of the Lambs was the next film to repeat this accomplishment in 1991.

Filming began in January 1975, and concluded approximately three months later, and was shot on location in Salem, Oregon, and the surrounding area, as well as on the Oregon coast.

This film is considered the 20th best movie of all times and was the defining film for Jack Nicholson’s early career.